If you had to sum up Lawcon owner, Derek Lawrence, in just a few words, you’d say ‘he’s a man with a plan’.

That plan has its origins back at the start of his career, working for Roberts Concrete Specialists, a concreting outfit operating out of Bennetts Green, Newcastle. “I started out labouring for them and in the midst of that, after hours, I went to night school to do my formwork coursework on construction carpentry,” shares Derek.

Now a qualified Formwork Carpenter, Derek began taking on more responsibilities within the business. “Over the years I supervised for Bob, my old boss. At that stage we had anywhere from 12-15 employees doing similar work to what we do now.”

This gave Derek a taste of what was to come. In late 2006, he headed back to school for a second time, with a specific goal in mind. “I wanted to do a bit more for myself, so I went and did a Cert IV in Business Management,” he says.

Juggling a full-time job, school and family responsibilities was no mean feat. “The full-time load was 3 or 4 courses a week,” Derek says. “It was a bit of a strain – we already had a couple of young ones, plus I was supervising. I’d be finishing that off as I was walking into the class – allocating staff, organising all the materials, plant – all that side of things.”

But Derek knew exactly where he was headed and a year of burning the candle at both ends would soon pay off. “By the end of 2007, when I was completing my course, I was in the middle of buying my boss out. He was wanting to get out of the game and retire,” Derek says. “While doing my Cert IV, I put together a full business plan. That was actually fully active – to the point that I had the TAFE teachers sign a declaration of confidentiality,” he laughs.

A good example of Derek’s forward focused vision is how he dealt with decisions like his business name and logo design. Roberts Concreting Specialists became Lawcon Construction – referencing Derek’s surname, Lawrence. “I put a logo together which was ‘LC’ – which still worked when we combined the two entities and scaled the name back to ‘Lawcon’,” he explains.

It wasn’t an easy time to be transitioning into becoming a business owner, with a global financial crisis on the horizon. “We were hit with the GFC early on and one of the larger builders that I worked for fell over because of all that,” says Derek. “So, yeah, we’ve been hit with some pretty hefty hurdles,” he laughs.

But Derek stayed the course, even taking on the challenge of gaining further qualifications during Lawcon’s early years. “Yeah, I went and did some more courses while I had my businesses running. I did my Diploma in Carpentry, so then I was a licensed builder.”

Necessity is, as they say, the mother of all invention. With a need for plant to run his construction operation, Derek fired up a second business. “We needed plant, so we started a separate company, Lawcon Plant Hire. Lawcon Construction was the construction arm – they’re both separate companies,” he explains.

When they first got into plant hire, the business didn’t own any machines.

“Within two years we felt the need to purchase our own equipment,” says Derek. “That first machine was a Kobelco SK55, a closed cab – which we’ve still got today, actually. It works great – even with 7,000 hours on it. We’ve got a couple of older machines still on site and still working. We’ve got no real reason to move them on.”

The 5.5 tonne machine was a little larger than the ones Derek had been subcontracting. “We’d stuck with gear between that midi range and the 3.5 to 5,” he explains. “We decided that the 5 just had that little bit more grunt – plus, they’re a good size for loading out for trucks etc, being just that tad smaller. That’s why we went that size – just trying to get the mix right.”

And what made him go with Kobelco? “One or two of the contractors had them. They just seemed like a pretty reliable machine,” says Derek. “As much as you might need to get something repaired or serviced, you don’t get too much breakdown time.”

Service options and availability were also a deciding factor. “Just the fact that there was somebody there to service them, you know,” Derek explains. “Other machines didn’t seem to have a major depot or a workshop set up – or even someone to call out on site if there was a breakdown or anything. And it’s not like you’d have a mechanic on hand off the back of owning one machine.”

Early on, building up their fleet took Derek on a few road trips. “I actually bought that first one, believe it or not, in QLD. We went here, there and everywhere in the beginning,” laughs Derek. “But when it comes to parts and servicing, we always took them back to Gato.”

Gato Sales and Repairs, the Newcastle dealership for Kobelco since 1998, now takes care of all Lawcon’s equipment sales, repairs and servicing needs. “I’ve always dealt with Chad, the owner. We’ve had a bit of a laugh and some serious talks along the way,” says Derek. “Over time, we’ve struck up a friendship as well.”

“The service is always spot on – makes it nice and easy,” Derek shares. “They’re mobile as well as depot-based, so we can get someone out on site quite quickly if necessary.”

Since purchasing that first machine, Lawcon has experienced steady, organic growth. “It’s been nice large sort of steps,” Derek says. “The plant was used in-house, then as people saw us about, they’d ring me up for machinery, like they had in the past. One thing sort of led to another. Then we were able to purchase another bit of plant and slowly build off the back of that.”

The Lawcon fleet now includes 19 bits of gear, ranging from the 1.7 tonne up to the 13 tonne Kobelco excavators. Staying consistent with the one brand, Derek says, has its advantages. “It just makes it easier if we’re going to do some internal servicing etc; all your filters and stuff are compatible. You’re not switching around.”

For his skid steer loaders, Derek chose top of the line ASV Posi-Tracks – the RT30 and RT50 models. “They’re the most user-friendly from an operator’s point of view – nice and smooth,” Derek explains. “Parts-wise, we can always get them, too – similar to the Kobelco. And, again, service is both mobile and depot based.”

Derek says while the maintenance on the Posi-Tracks is a bit of an investment, he wouldn’t be without them. “They’re a bit harder on the footprint – just due to the actual equipment itself, not necessarily a brand scenario. They just work a bit harder,” he explains. “Because we’re a plant-based business, we can’t turn around and go ‘we’re not going to have a Posi-Track’. They do a different job and work hand in hand with the excavators.”

For attachments, Derek went with a mixture of Auger Torque and Digga. “Internally we use a lot of augers for piering. We also do screw piering, so that’s a different style of auger altogether.”

Derek finds the Auger Torque attachments to be really well thought-out. “Even down to where the hoses come out. With the Digga we’ve had a few pinched hoses etc. The Auger Torque is just that bit better designed – less dramas.”

For hitches, Derek can’t fault the Doherty Quick Hitch. “That’s what Gato set us up with from the beginning,” shares Derek. “We got lucky and landed a good deal with those. I think the boys at Gato know we’re pretty particular. Easy going to deal with, but particular with what we’re after.”

Derek explains that the quality of attachments and hitches significantly impacts the way operators experience the machines. “If the hitch is tricky or the bucket is forever breaking teeth, the operator can get frustrated. You get that on-flow of issues on site then. You want to minimise any of that.”

Avoiding any downtime is certainly a major concern for anyone working in the industry. “Yeah, reducing downtime is paramount. Not just as a cost for the business, but for the client, more importantly,” Derek explains. “When that happens, you’re slowing or stopping what they’ve got scheduled for the day.”

To keep things moving, Lawcon handles some maintenance internally, but relies heavily on the team at Gato. “It depends on our workflow; if we’re under the pump, those internal resources are better used elsewhere, so we take it into the dealership.

Got a good thing going with those guys – they look after us.”

In terms of his own team, Derek can have anywhere up to 30 staff out on-site. “Most of our equipment is out every day at the moment, so that’s around 14-15 men in the plant side of our business,” he says. “It’s around the same in the construction arm. We try to keep a core group of boys. Some have been with me from the start and the majority for years, rather than weeks or months. We’ve got a good crew.”

There’s some flexibility in terms of how staff work within the business. “They are two separate arms, but the boys work in well from one to the other. More often it’s the plant side that comes over to assist the boys on the construction if needed,” Derek explains.

Not one to shy away from getting his hands dirty, Derek still likes to get on the tools. “Yeah, I still put the boots on, or the nail bag, and give the boys a hand,” he laughs. “I don’t think it hurts. It takes me back to my roots – shows it’s real.”

Back in the early days, Lawcon focused on residential, but later diversified into industrial, then the civil market. “On our construction work, we’re reasonably diverse, but we do specialise in civil style construction. We work on road crossings, culverts, bridge culverts – a range of stuff in that sector,” Derek says. “We also do tilt construction on a commercial basis; everything down to slabs – raft slabs, pod slabs etc – all those as well.”

The plant side of the business tackles a similarly broad range of projects. “Our plant does site cut, bulk and earthworks, material haulage – everything from final trim to boxing out for road crossings,” Derek explains. “So yeah, it’s a real mix between the two companies – we’re pretty strong in that regard.”

The business is pretty busy, especially considering the situation with COVID-19. “We’ve had a nice steady flow of jobs,” says Derek. “A mixture of pavement style work, subdivisions, spillways, we’ve got a raft slab going, retaining walls, even some ring beams in at Newcastle University – for rain harvest tanks to go on,” he says. “We’ve managed to keep that same client base we’ve had for some time – which is good. So, yeah, not a whole lot changed for us.”

Keeping up team morale was important to Derek in the face of a global pandemic. “We tool-boxed that with all our staff, you know, to get through that period,” he shares. “Just to give them that confidence that everything was going to be OK – that we’ll be going on as normal, if not growing through it.”

That genuine care for his staff, along with the opportunity to work close to home, is no doubt why Derek’s team have stuck with Lawcon long-term. “We work within our own region so they get to go home to their families every night, as opposed to working away, you know,” shares Derek. “That’s probably one of the best things about our business.”

How does Derek keep the projects rolling in? “Through hard work,” he laughs. “We’re committed to meeting our customers’ needs. You get a lot of that return business by looking after people.” 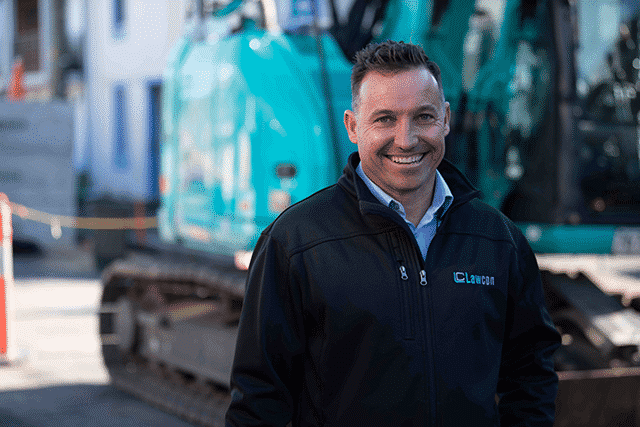 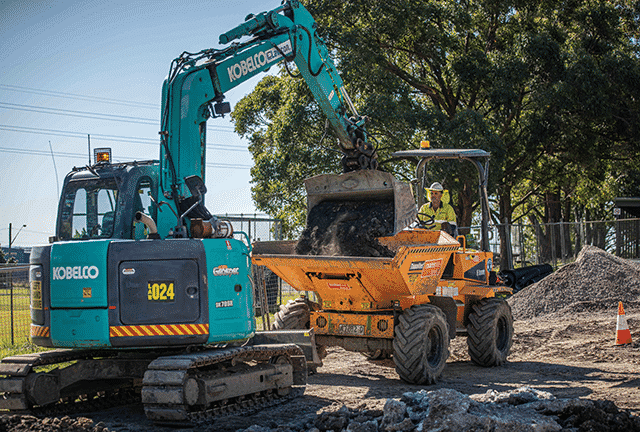 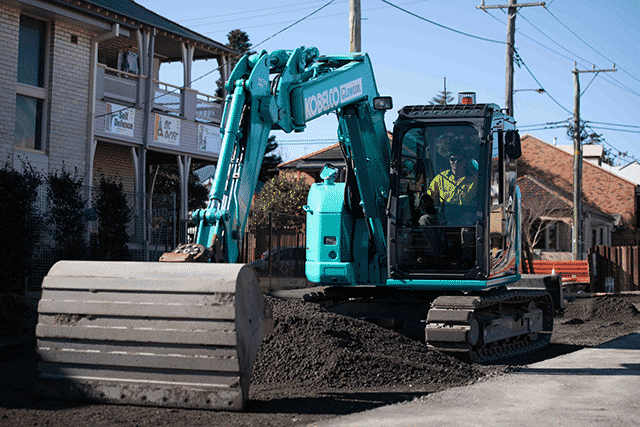